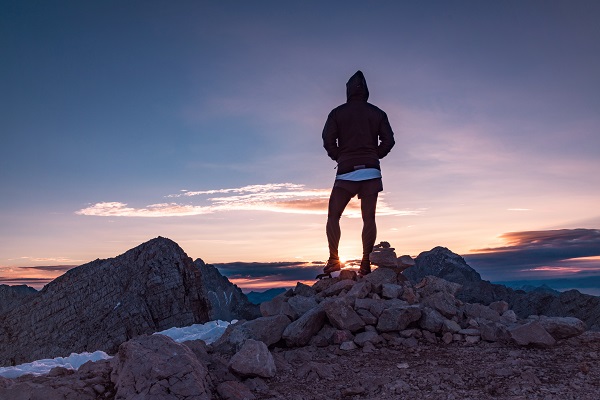 ” Therefore, if anyone is in Christ, the new creation has come: The old has gone, the new is here! (2 Corinthians 5:17)”

Therefore if any man be in Christ

There’s a secret being in Christ from everlasting; so all that are loved by him, espoused unto him, chosen and preserved in him, to whom he was a covenant head, surety, and representative, are in him, united to him, and one with him; not in such sense as the Father is in him, and the human nature is in him, but as husband and wife, and head and members are one: and there is an open being in Christ at conversion, when a man believes in Christ, and gives up himself to him; faith does not put a man into Christ, but makes him appear to be in him: and such an one “is a new creature”; or, as some read it, “let him be a new creature”: who understand being in Christ to be by profession, and the sense this, whoever is in the kingdom or church of Christ, who professes himself to be a Christian, ought to be a new creature: the Arabic version reads it, “he that is in the faith of Christ is a new creature”.

All such who are secretly in Christ from everlasting, though as yet some of them may not be new creatures, yet they shall be sooner or later; and those who are openly in him, or are converted persons, are actually so; they are a new “creation”, as the words may be rendered: (hvdx hyyrb) , “a new creation”, is a phrase often used by the Jewish F8 doctors, and is applied by the apostle to converted persons; and designs not an outward reformation of life and manners, but an inward principle of grace, which is a creature, a creation work, and so not man’s, but God’s; and in which man is purely passive, as he was in his first creation; and this is a new creature, or a new man, in opposition to, and distinction from the old man, the corruption of nature; and because it is something anew implanted in the soul, which never was there before; it is not a working upon, and an improvement of the old principles of nature, but an implantation of new principles of grace and holiness; here is a new heart, and a new spirit, and in them new light and life, new affections and desires, new delights and joys; here are new eyes to see with, new ears to hear with, new feet to walk, and new hands to work and act with:

old things are passed away:

the old course of living, the old way of serving God, whether among Jews or Gentiles; the old legal righteousness, old companions and acquaintance are dropped; and all external things, as riches, honours, learning, knowledge, former sentiments of religion, are relinquished:

behold, all things are become new;

there is a new course of life, both of faith and holiness; a new way of serving God through Christ by the Spirit, and from principles of grace; a new, another, and better righteousness is received and embraced; new companions are sought after, and delighted in; new riches, honours, glory, a new Jerusalem, yea, new heavens, and a new earth, are expected by new creatures: or the sense of the whole may be this, if any man is entered into the kingdom of God, into the Gospel dispensation, into a Gospel church state, which seems to be the sense of the phrase “in Christ”, in ( Galatians 3:28 ) ( 5:6 ) ( 6:15 ) he is become a new creature, or is got into a new creation, as it were into a new world, whether he be a Jew or a Gentile; for with respect to the former state of either, “old things are passed away”; if a Jew, the whole Mosaic economy is abolished; the former covenant is waxen old, and vanished away; the old ordinances of circumcision and the passover are no more; the daily sacrifice is ceased, and all the other sacrifices are at an end, Christ, the great sacrifice, being offered up; the priesthood of Aaron is antiquated, there is a change of it, and of the whole law; the observance of holy, days, new moons and sabbaths, is over;

the whole ceremonial law is at end; all the shadows of it are fled and gone, the things they were shadows of being come by Christ, the sum and substance of them; and there is no more a serving God in the oldness of the letter, but in the newness of the Spirit: and if a Gentile, all the former idols he worshipped he turns from, and his language is, “what have I to do any more with idols? or what agreement hath the temple of God with idols?” all former sacrifices, superstitious rites and ceremonies, with which he worshipped them, are relinquished by him; with all other Heathenish customs, rules, and methods of conduct he had been used to: “behold, all things are become new”; to the one, and to the other; the Gospel dispensation is a new state of things; a new form of church state is erected, not national, as among the Jews, but congregational, consisting of persons gathered out of the world, and anew embodied together; new ordinances are appointed, which were never in use before, as baptism and the Lord’s supper; a new and living way is opened by the blood of Christ into the holiest of all, not by the means of slain beasts, as among the Jews, nor by petty deities as with the Gentiles; a new commandment of love is enjoined all the followers of the Lamb; and another name is given them, a new name, which the mouth of the Lord their God has named, not of Jews nor Gentiles, but of Christians; and new songs are put into their mouths, even praise to God: in short, the Gospel church state seems to be, as it were, a new creation, and perhaps is meant by the new heavens and new earth, ( Isaiah 65:15 Isaiah 65:17 ) as well as those who are the proper members of it, are new creatures in the sense before given.

from John Gill’s Exposition of the Bible