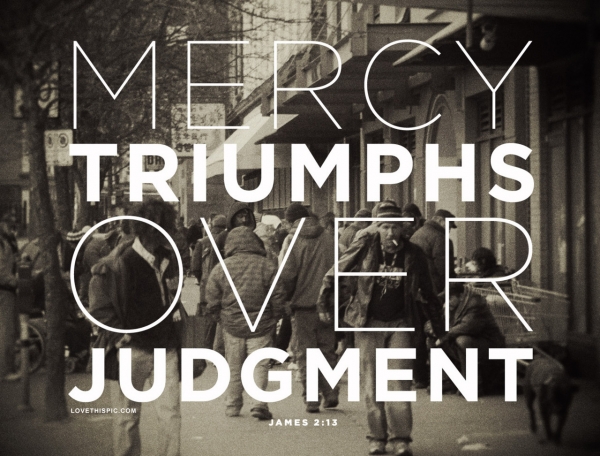 “Speak and act as those who are going to be judged by the law that gives freedom, because judgment without mercy will be shown to anyone who has not been merciful. Mercy triumphs over judgment.” James 2:12-13.

In this part of the book of James, the focus is on not showing favoritism. It states that we should not favor the rich over the poor and explains how the Lord shows more favor to those poor on earth but “rich in faith” (James 5). The rich represent those who have many values on earth while the poor represent those who have more spiritual value. It also talks about how it is important to follow all the laws. But we should keep this in mind: we do not have the right to judge anyone.

We are all flawed people. It doesn’t matter if we consider someone else’s flaw or wrongdoing to be worse than ours. The judgment that we will face when we are no longer here will not be based on how we feel we did or by comparison to others. Judgment only comes from God. And God is harsh towards people who only see the wrong and others, but doesn’t reflect on their own wrongdoing. He favors those who have the kind of heart to know themselves as sinners and chooses to changes themselves. We aren’t righteous people, so we shouldn’t behave as if someone is lower than us or compare people we feel is more righteous. That’s not our purpose in life.

God does not want us to be judge over others. Instead, he wants us to do our best to not face harsh judgment from Him. Our focus should be on correcting our own lives and being better Christians. And part of being a Christian is to be able to love each other. Judgment discourages this, because we start to think less of people and decide not to treat them in a good way. But mercy encourages love. Despite how we may see certain people, mercy encourages us to look beyond that and see that person as someone like you: a person with flaws, a person who doesn’t always do the right thing, and a person who despite everything, God still loves and has mercy towards.