YEF Joint Prayer Retreat was concluded with the decision to be the person of prayer. YEF HQ hosted 3 days prayer retreat with the theme of ‘The People of Prayer within the Old Testament’. A total of 27 attendees learned the prayers of Abraham, Moses, Joshua, Elijah and Daniel. They also had prayed together every morning and evening with hearts set on fire and many desiring and receiving personal prayer from prayer leaders. This was a time of confession of their sins, counseling and being renewed by the Comforter.

On the third and last day of retreat, November 24th, there was morning prayer and they prepared their hearts to receive even an bigger dream from God. They also prayed not to lose all the grace they received during the retreat but follow-up with personal prayer, group prayer and bible study. God really blessed this time.

Taking from Genesis 18:1-33, Pastor Anderson Kim, the representative of YEF, addressed the ancestor of faith, Abraham: his prayer and heart towards God. He spoke about the three visitors, the angels, that came to Abraham’s tent and how well and eagerly he served them. He didn’t even know these people were angels but served them with such a beautiful heart. In Hebrews 13:2, it speaks about this very thing, showing hospitality to strangers and having this brotherly love. Immediately from these verses, the congregation could know that Abraham had a heart that was concerned with others, even strangers.

Through Abraham’s prayer in Genesis 18:16-33, they were able to understand this heart of public mourning and intercessory prayer for Sodom and Gomorrah.

“Abraham knew God’s heart,” P. Anderson spoke, “God doesn’t find joy in punishing, but wishes for Man to turn back to Him and for even a few, God wouldn’t destroy. So Abraham prayed this audacious prayer before God.” 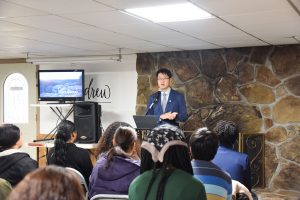 He explained that this not only shows how we should pray for our cities, countries and this world before God, but also this close relationship that even Abraham can ask God as he does.

As the members concluded the final service of the prayer retreat, each hopes to gain or retain this same heart of God. To dream a bigger dream for the Kingdom of God, rather than focusing on small things. We must have this heart of public concern and pray for others, this way God’s Kingdom can come even sooner and through this, there will be overflowing blessings.

After the sermon, everyone took photos together, had a delicious meal and cleaned and said their final goodbyes to each other and the prayer garden. All members, new and old, expressed their deep wish to hold onto the grace that each one received.