To support and fully focus on the 153 Countries initiative, especially the countries in Africa, Youth Evangelical Fellowship Africa (YEF Africa) has set a weekly prayer and research focus on two countries each week. This initiative began last week, with Chad and Cameroon as the major focus. Chad and Cameroon, located in a similar region (between West, North, and Central Africa), also share many cultural and political similarities with some significant differences.

Chad, also known as Tchad, has an estimated population of 16.2 Million, with 47% of the population being under fifteen. It is landlocked between Libya (North), Sudan (East), Central Africa Republic (South), Cameroon (Southwest), Nigeria (Southwest), and Niger (West). Its capital city is N’Djamena, which also houses the only public university-The University of N’Djamena. 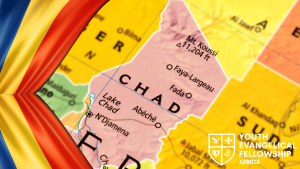 Chad’s population is unevenly distributed, with a density of 0.1/km^2 in the Saharan-Borkou-Ennedi-Tibesti region and 52.4/km^2 in the Logone Occidental region. Half the population lives in the country’s Southern part, hence the higher population density. Chad has over 200 unique ethnic groups with over 200 languages and dialects. The official languages are French and Arabic, with English playing a very small role.

Chad has often been declared a failed state due to the multiple human rights violation, civil unrest, illiteracy (half the population is considered illiterate), and poverty that is quite common in the Country, especially in the Northern region. Electricity, cellular network, internet, and running water can often not be found in most regions except for the capital city, and even then, it may be inconsistent and expensive. The capital city is where most of urban life is concentrated, and there are major developing towns such as Doba, Sarh, Moundou, and Abéché.

While the situation in Chad may seem hopeless, there is a small cloud with 44.1% of the population being Christian, divided between 22% Catholic and 17% protestant. With such a big population, this means that about 2.7 Million Christians live in Chad which is quite a significant amount of people. Most Christians are concentrated in the South, and most religious groups tend to coexist without issues. Additionally, Chad is a common mission ground for Christian and Islamic missionaries who visit the Country to provide physical and spiritual aid.

Chad also has a rich history and culture, and its people are generally humble, relaxed, and friendly people and they expect foreigners to respect their beliefs and traditions.

Cameroon, which shares a border with Chad, Central Africa Republic, Nigeria, Guinea, Gabon, and the Republic of Congo, consists of 10 major regions, with 2 of them being English-speaking and 8 being French-speaking. The official languages are English and French. Cameroon is considered predominantly Christian, with 70% of the population practicing Christianity and 24% practicing Islam. Its capital city is Yaounde, but its most populous city is Douala.

Unlike Chad, Cameroon has a high literacy rate of 71.3%; amongst the youth, the rate is 85.4% for males and 76.4% for females, with most people having significant access to public schools. For tertiary education, there is a handful of universities in the country, such as the University of Douala and the University of Yaounde. Overall, while the conditions in Cameroon may be better, the country is not without its own share of problems, such as health issues and some conflicts, especially in the north by the Lake Chad region.

Cameroon is a very hopeful and important country as it can serve as a “big brother” to french speaking countries in Africa, such as Chad. Because English and French are spoken fluently, more French-speaking Bible study teachers can be set up in this region. Currently, there is one Bible study student who speaks both English and French, and the fellowship is also anticipating at least ten more students from Facebook Evangelism.

YEF Africa Leader shared, “The more I pray and research for these two countries, I could feel moved in my heart. There is so much physical and spiritual suffering, and there is a big need for the true Gospel in Africa. I want to pray more for these countries and actively keep them in my heart.”