The Faith of Feeding Five Thousand 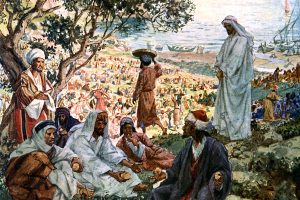 Some time after this, Jesus crossed to the far shore of the Sea of Galilee (that is, the Sea of Tiberias), 2 and a great crowd of people followed him because they saw the signs he had performed by healing the sick. 3 Then Jesus went up on a mountainside and sat down with his disciples. 4 The Jewish Passover Festival was near.

5 When Jesus looked up and saw a great crowd coming toward him, he said to Philip, “Where shall we buy bread for these people to eat?” 6 He asked this only to test him, for he already had in mind what he was going to do.

7 Philip answered him, “It would take more than half a year’s wages[a] to buy enough bread for each one to have a bite!”

8 Another of his disciples, Andrew, Simon Peter’s brother, spoke up, 9 “Here is a boy with five small barley loaves and two small fish, but how far will they go among so many?”

10 Jesus said, “Have the people sit down.” There was plenty of grass in that place, and they sat down (about five thousand men were there). 11 Jesus then took the loaves, gave thanks, and distributed to those who were seated as much as they wanted. He did the same with the fish.

12 When they had all had enough to eat, he said to his disciples, “Gather the pieces that are left over. Let nothing be wasted.” 13 So they gathered them and filled twelve baskets with the pieces of the five barley loaves left over by those who had eaten.

This is a very well-known miracle work within the Word, the feeding of the 5000.

Jesus asks Philip a question, as a test to see his heart and the heart of Jesus’ disciples. What qualities of the disciples were revealed here and how did Jesus approach feeding these 5000?

Jesus has the heart to feed these souls, and what’s more is that He wants to include the disciples in this grand blessing.  But then what was the response? 7 Philip answered him, “It would take more than half a year’s wages[a] to buy enough bread for each one to have a bite!”

‘Lord, even if we wanted to, it’s impossible. We can’t do that, so why even try?’ Look at the reality of the situation. Jesus wanted to feed these 5000, but he is a wandering teacher with no home and the disciples have nothing, they are lowly fishermen and jobless. Of course, the situation is impossible, right? So why even have the heart to do it, when it’s just impossible? And so the disciples don’t have this heart that matches Jesus. They had these immature, cold, and selfish hearts.

Jesus knew what miracle He was about to perform, but wanted to use the opportunity to teach His disciples. For Jesus, this wasn’t only about getting a job done (feeding the multitude), but also about teaching His disciples along the way.

And the crazy thing is that Philip had already seen Jesus do many miracles; so there should have been no question to him about the divine resources Jesus had. Perhaps if he’d even just responded, “Oh Lord, only You know where this bread can come from…” Then this alone would have shown great faith and reliance in Jesus, but instead, with his own thoughts and own judgments, he deems the situation impossible.

Many times for us, our priority is always on the realistic situation, we say it’s impossible. We’ve seen God work and we’ve been witnesses to His miracles, but a symptom of the disease of sin is this amnesia. We must feel it worthwhile to keep God at the center of our hearts. And so even as people of God, we still struggle because we don’t put our faith and reliance on God. We easily lose hope and easily look to other things, instead of Christ. But all this does is limit the great miracle that God wishes to perform in our lives.

Looking at Christ, we see how He doesn’t limit himself. If many people had this heart the world will really change, then what amazing things God could do in and through us. We always remain at this calculating and smart level, but in the world of faith says there is nothing that’s impossible. It’s that simple, all we have to do is believe this. The door is opened up and God can save a lot of people through a heart that simply has these two things : love and faith. I hope we can all touch Heaven in this way so we can experience this miracle.

Jesus’ heart is towards those in the desert. We should feed them and love them.

“The days are coming,” declares the Sovereign Lord,
“When I will send a famine through the land—
not a famine of food or a thirst for water,
but a famine of hearing the words of the Lord.

People are hungry, but do we have this heart to feed them, or do we just say it’s impossible and not even think about it or try? Notice carefully the nature of this famine. It is not a lack of God’s Word, but a famine… of hearing the words of the LORD.

We may question, whether we feed enough on God’s Word and allow others this same privilege. If we’re to grow strong, we must feed, not on condiments and small snacks; but on the hardy meal of the Word, on the doctrines, histories, and types of Scripture. And we must be those who supply, what’s in this unlimited storehouse of Heaven.

John 6:8-9 – Another of his disciples, Andrew, Simon Peter’s brother, spoke up, 9 “Here is a boy with five small barley loaves and two small fish, but how far will they go among so many?”

If we at least have the open mind and faith to bring something, God can use us like this small boy. Through his heart, Jesus was able to perform a miracle and he was able to feed 5,000. This boy is eternally recorded in Heaven. Even though he is so small Jesus used him, because he had a greater heart than even the disciples. And just like this, God can use us too even though we look so small, shabby, insignificant. Did the buy volunteer to give what he had actively? Did Andrew just pick him from a crowd and he simply followed? Either way, the simple faith to even follow is greater than the answer the disciples gave before. 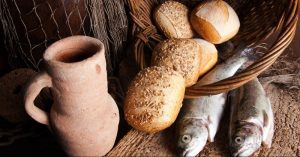 This boy only had 2 fish and 5 barley loaves; this wasn’t luxury fish and soft buttery bread, even. It was a small lunch for travel, something made to last and a lowly sort of meal. Barley was always regarded as simple food, more often fit for animals than for people. This means it is likely that the young boy came from a poor family. But he emptied out everything he had. The boy didn’t even think about it. He gave out of love.

When we empty out, a great miracle happens. Through this little boy’s emptying out 5,000 people were fed. Even through this small amount of food, this small sacrifice. Big sacrifices would be good, but what God looks at is our hearts. There wasn’t much to work with, but God doesn’t need much. In fact, God doesn’t need any help – but He often deliberately waits for us to participate in a grand miracle like this. The small things don’t remain as they are, in the right Hands. By emptying out great miracle happens.

Ultimately this is shown through the cross and the resurrection of Jesus. He emptied out and many, many lives were saved.

John 6:12-13 – When they had all had enough to eat, he said to his disciples, “Gather the pieces that are left over. Let nothing be wasted.” 13 So they gathered them and filled twelve baskets with the pieces of the five barley loaves left over by those who had eaten.

So let nothing be wasted. They receive this love, and satisfaction from the Lord. What do they do with it? Go and share with others. What do we do with the bread the Lord has given us? Our hearts are deeply fed and because we are filled, we carry it to others. This is the work of love. It does not stop. That’s how God keeps feeding these people.